Wood composite is a material made of a mixture of wood fibre and plastic. There isn’t just one type of wood composite, but several. Every manufacturer has their own composition and the quality of the wood composite changes from one to the next. Wood composites offer a number of environmental advantages, as they are made from recycled wood chips and sawdust. This means it’s an infinitely recyclable material.

The wood composite market is growing in Europe, and it’s a product that is constantly evolving. 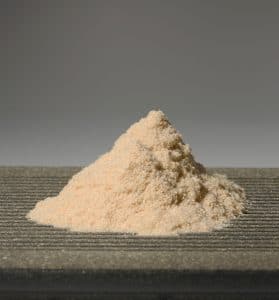 The origin of wood composite as we know it today is a controversial subject. Some people think that it was created by Nichibori Sadao in 1975. However, no patents exist that prove this. Others say that it was created in 1985 with the Clextral patent.

Whatever the truth is, the combining of wood with polymer isn’t a modern concept.

In actual fact, thermoset composite materials started to appear in the early 1900s,with the most notable product being Bakelite. Developed between 1907 and 1909, this was one of the very first polymers. It was in the 1920s that wood flour was added to Bakelite, and the result was the foundations for wood composite. This material was used in the car industry.

After this product was developed, the compatibility of cellulose-containing fillers and PMCs was increased through the use of binding agents.

The properties of wood composite were improved through the use of plastics such as PE (polyethylene), PP (polypropylene), PVC (polyvinyl chloride) and ABS (acrylonitrile butadiene styrene).
It was the Clextral patent, filed on 24 April 1985 and titled “method of producing composite materials comprised of a mix of cellulose particles and a thermoplastic bond” that saw the creation of wood composite as we know it today, and not the work of Nishibori Sadao in 1975 as some sources maintain. We owe this patent to the inventor Pierre Duperrier. In 1992, this patent was used in Italy with the  ICMA patent, known as the “Woodstock patent”. Designed to be an alternative to exotic species of wood threatened by deforestation, wood composite is an environmentally friendly material made from a mixture of recycled wood fibre and plastic resins such as polypropylene, polyethylene or PVC.

Subsequently, the ICMA patent crossed the Atlantic and was used in the USA by the companies American Woodstock, Timbrex and Advanced Chemical Environmental Technologies (A.E.R.T.) who manufactured the first composite extrusion materials at the end of the 1980s.

It was in this decade that American Woodstock, now part of the Lear Corporation based in Sheboygan, Wisconsin, started producing car interiors from wood composite using the Italian extrusion technique. This was one of the first major applications of wood composite technology in the United States.

At the start of the 1990s, A.E.R.T and the Mobil Chemical company, later Trex, began to extrude composite products made from around 50% wood fibre and 50% polyethylene. Most of this was for composite decking boards. Around the same time, the Anderson Corporation started making PVC-based wood composite products, such as door profiles and window frames.

Competition helps us develop and we are witnessing real technological advances. So, in 1994, the American research department Strandex developed a unique patented formulation that provided an end product with numerous advantages: a natural resistance to organic breakdown and humidity, non-fading colours, low maintenance levels, quick and easy installation, splinter free, rot-proof and anti-slip.

It is also worth mentioning EinWood (TM) technology, developed in 1992 by the Japanese company EIN Engineering. This company holds a number of patents and the technology is very popular in Southeast Asian countries such as China, Japan and Malaysia.

All these patents have meant the mechanical properties of wood composite have continually improved, as has the compatibility of the fillers and the PMCs thanks to better binding agents.

Silvadec® was founded in France in 2001, and was the first company to manufacture wood composite in Europe. The cofounders, Bénédicte Jézéquel and Philippe Crez, contacted the leading North American company to develop a special formulation of wood composite made largely of wood flour to create Silvadec wood composite, a patented product. 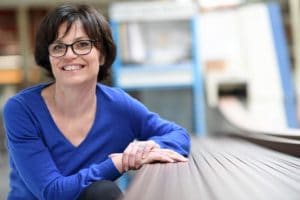 Director Bénédicte Jézéquel says,
“Determined to be entrepreneurs, myself and Philippe Crez set up Silvadec® in 2001 by launching a new product on the European market, Silvadec® wood composite.” By putting the emphasis on innovation and the capturing of new markets, we are very proud that our company has become the European leader in composite wood. Aware of the great ecological challenges of our era, we are committed to a pro-active policy to reduce our environmental impact, validated by a ISO 14001 certification obtained in 2014. Since it was set up, Silvadec® has created more than 80 jobs in Europe. With all our employees, we do everything necessary to meet our customers’ every requirement. ”

In the 2000s, driven by Silvadec, the wood composite market developed throughout France and Europe. Technologies evolved and the range of products available grew.
In 2008, co-extruded products appeared. Co-extrusion comprises the addition of a thin film of polymer around the board. The board and film are then extruded simultaneously, producing a multi-layered product. This thin film acts as a protective layer for the board. It is like a protective varnish, and renders the board waterproof.

The benefits of such a product include the fact that the colour doesn’t fade and it is easier to clean household stains.

2008 saw the creation of WHS (Wood Hybrid Systems). This technology combines an aluminium core with a wood composite skin, making it possible to produce profiles that are more lightweight but still have good resistance to bending. The main use of these profiles is as louver-board or brise soleil cladding. However, they do come at an increased cost.

From 2010 to 2015, the demand for wood composite increased from both private individuals and public facilities such as airports, marinas, hotels, etc. Competition became more and more fierce, and the number of manufacturers on the market, and exporting to Europe, grew.

Manufacturers developed their ranges and increased the applications to include fencing, cladding and railings. They also launched a number of decorative and functional accessories as add-ons to the product ranges.

Since 2015, the market has stabilised, with the focus on suppliers with adequate production capacity, and the benefits of the best prices or quality levels. Specialist distribution, i.e. specialist wood companies, building materials companies and DIY superstores, account for more than 90% of wood composite sales in France. In these outlets, there is a clear distinction between low prices from Asiatic manufacturers and higher quality from North American and European manufacturers.

There is also another option available to these distribution outlets, namely VPC and Internet sales, albeit a marginal one. This option is fleeting as brands disappear almost as quickly as they appear. However, this market does allow manufacturers or importers to sell products even if they can’t convince distributors on the quality or price.

Honeycomb profiles dominate the fencing and cladding market, while solid boards are preferred for decking.

Other sectors are starting to invest in this market, for example the furniture sector, for office furniture made from plastic, and also the carpentry industry thanks to the development of high-performance finishes.

The only sector not yet conquered by wood composite is construction. At the moment, the structural make-up of wood composite means that it can’t be used as a building material.

However, manufacturers have not given up hope on achieving this goal in the very near future. Today, North America is still the largest market worldwide for wood composite products.

Silvadec® wood composite, the heart of the company.

As the name suggests, wood composite is a composite material, i.e. made of at least two non-miscible components but with a high penetration capacity (with the two properties complementing each other). The new material thus has properties that the individual elements don’t possess.

By continuing to visit this site, you accept our legal notices and the use of cookies only used by Silvadec for statistical purposes.OkRead more about it